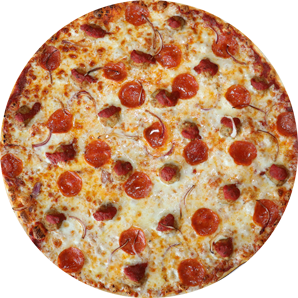 This one will shake your nerves and rattle your brain. We took our signature spicy sauce, topped it with mozzarella, added Italian meatballs, pepperoni, and red onions. Then we put a dollop of spicy sauce on each meatball and Goodness Gracious, Great Balls of Fire! 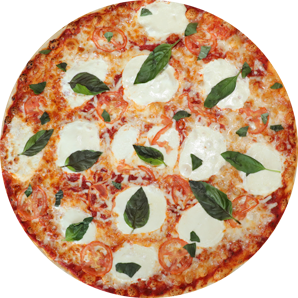 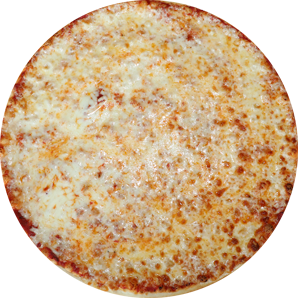 No Sleep 'til Brooklyn

Who doesn't love a good slice of NY Style Pizza? This is our take on it. We ain't the original, but imitation is the highest form of flattery. This classic cheese pizza is even better by the big slice, washed down with a cold brew. Ask for Spicy Sauce. 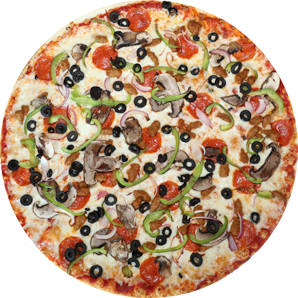 This is the pizza you've been yearning for, it is loaded up with pepperoni, beef, sausage, ham, green bell peppers, red onions, and black olives. 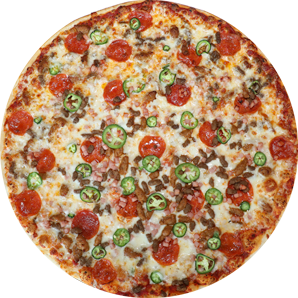 Just enough heat to make you reach for another beer, but not enough to prevent you from going for another slice of this beauty. Loaded up with pepperoni, beef, sausage, ham, fresh jalapeños, and our signature spicy sauce. 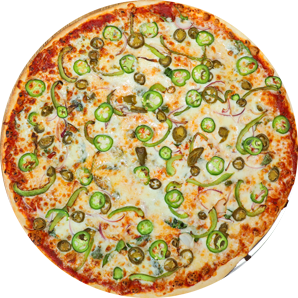 We wanted to show some love to our vegetarian friends so we created this one. It features mozzarella, red onions, bell pepper, spinach, fresh & pickled jalapeños. Fresh mushrooms, Campari tomatoes, cilantro, basil, and black olives are available on request. Rock it your way or rock it our way. 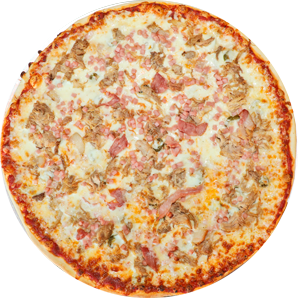 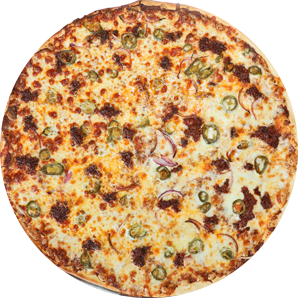 This one starts with spicy Mexican black bean sauce. It is topped with Mozzarella, chorizo (Mexican sausage), jalapeños, and red onions, then served with a fresh pico de gallo. This will put a spell on you, baby. 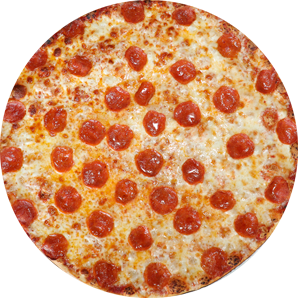 Not all bands are rich and famous, living in excess. This Two XL two-topping special is a pleaser on a budget. Chose any 2 toppings on both pizzas.

Create Your Own Pizza

Create your own 18" pizza by picking your sauce (Tomato, Spicy Tomato, or Alfredo) and then choosing up to 6 of the following toppings: Sausage, Beef, Ham, Pepperoni, Fresh Jalapeños, Pickled Jalapeños, Black Olives, Mushrooms, Bell Peppers, Red Onions, and Fresh Tomatoes.

Playing your favorite music from the ’70s, ’80s, and now. We hope to be the perfect backdrop for a night out with friends and family.

So come join us here at Laredo Rooftop Lounge for a one-of-a-kind experience!

Make sure you stop by on Thursday, Sunday, & Monday to check out NFL on our rooftop projector. 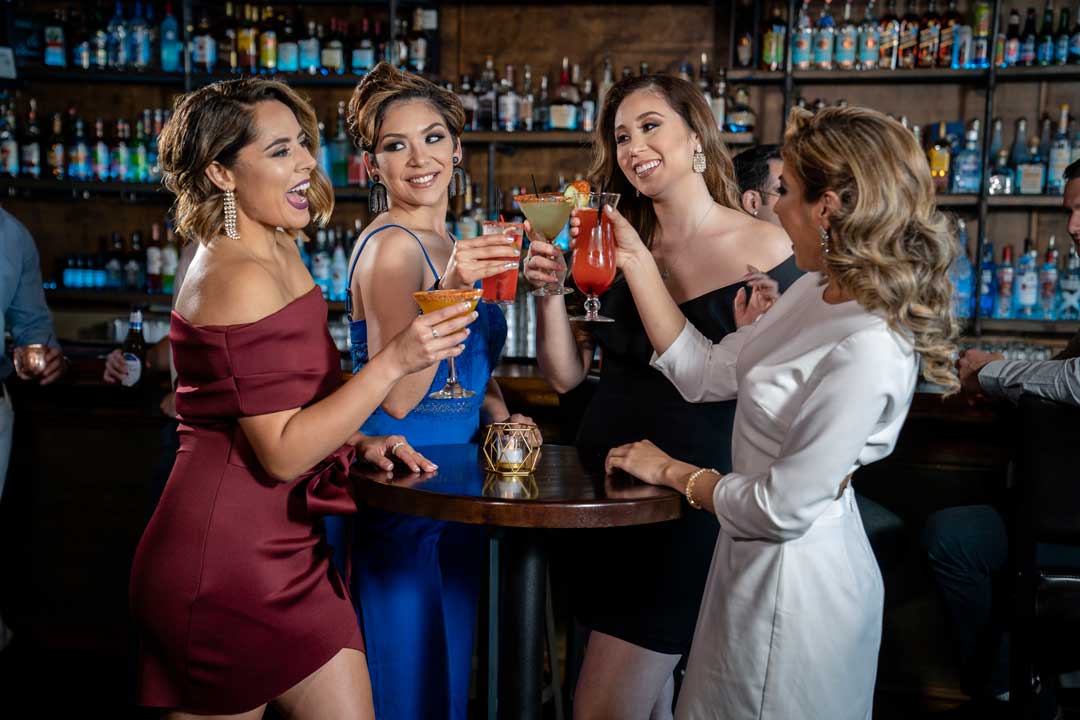 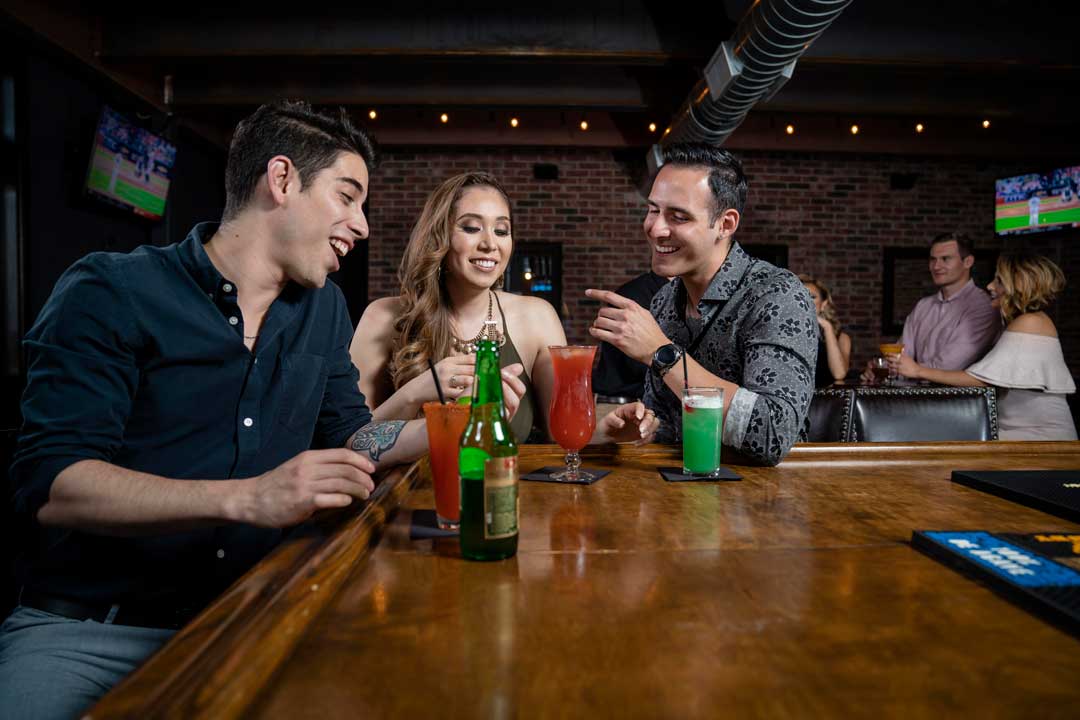 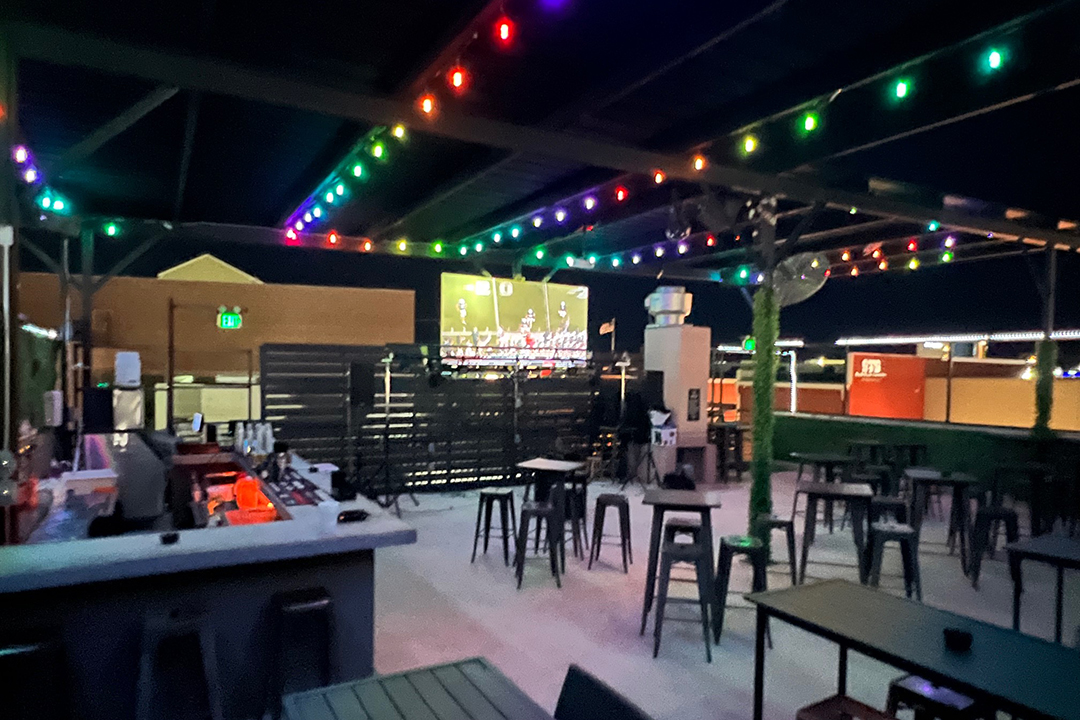 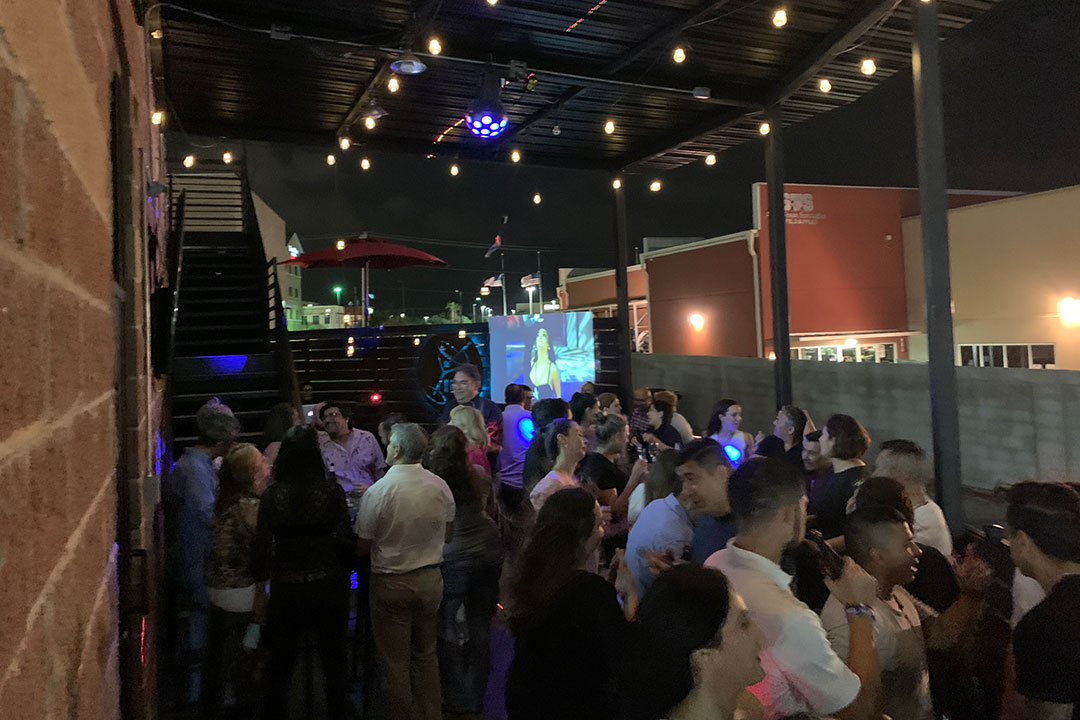 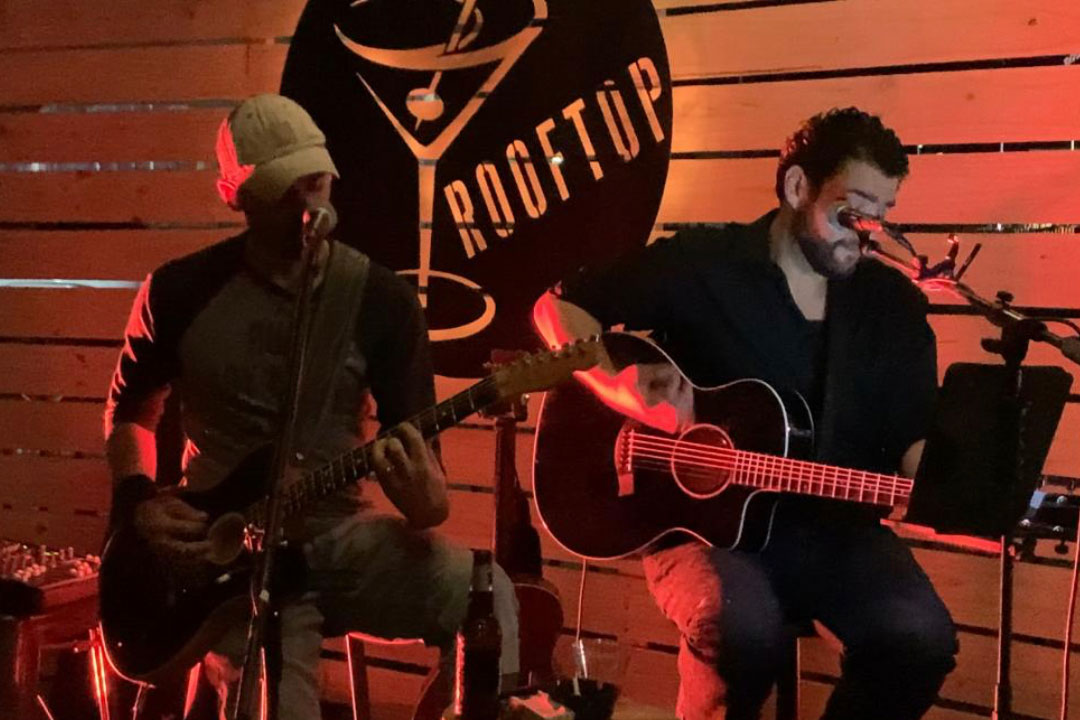 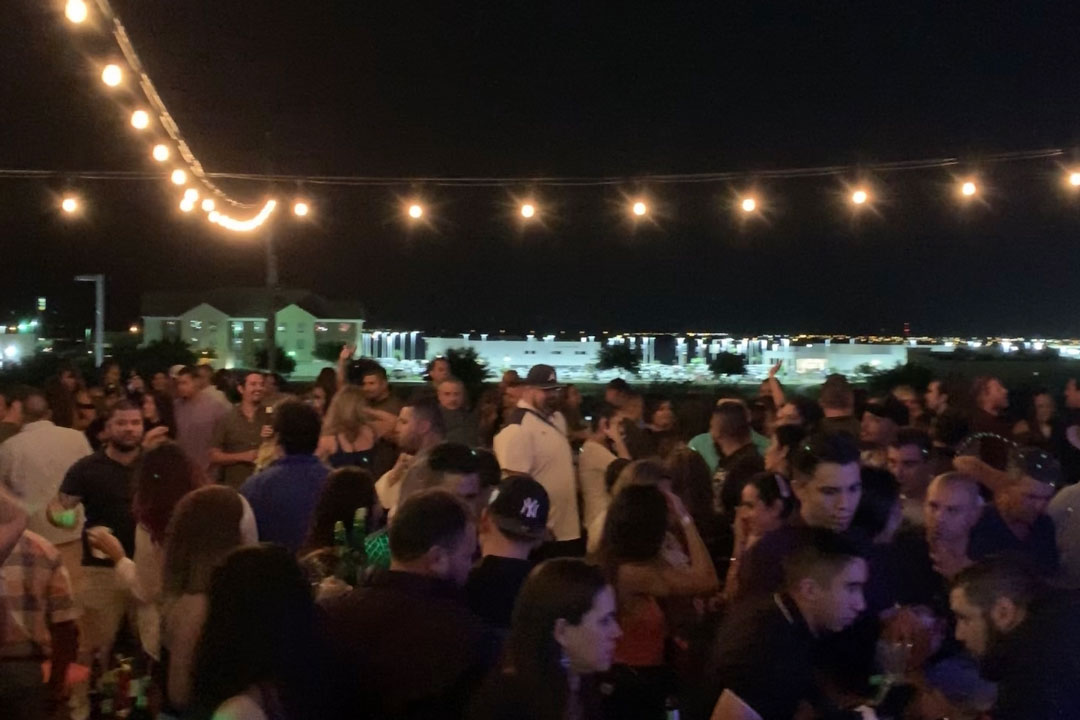 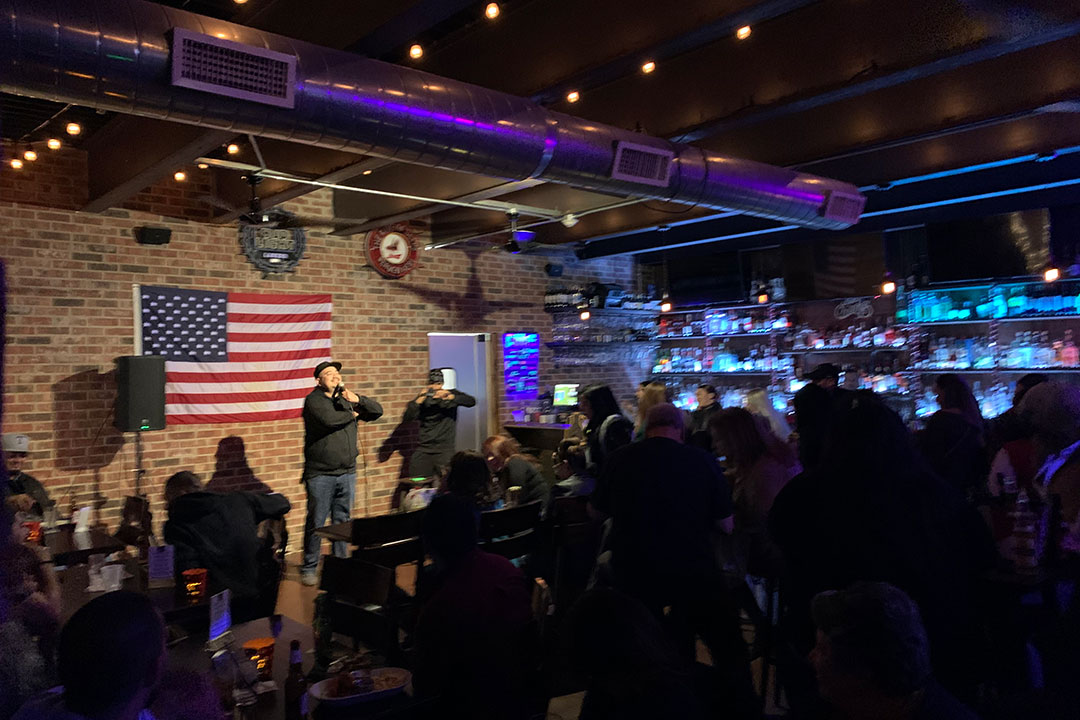 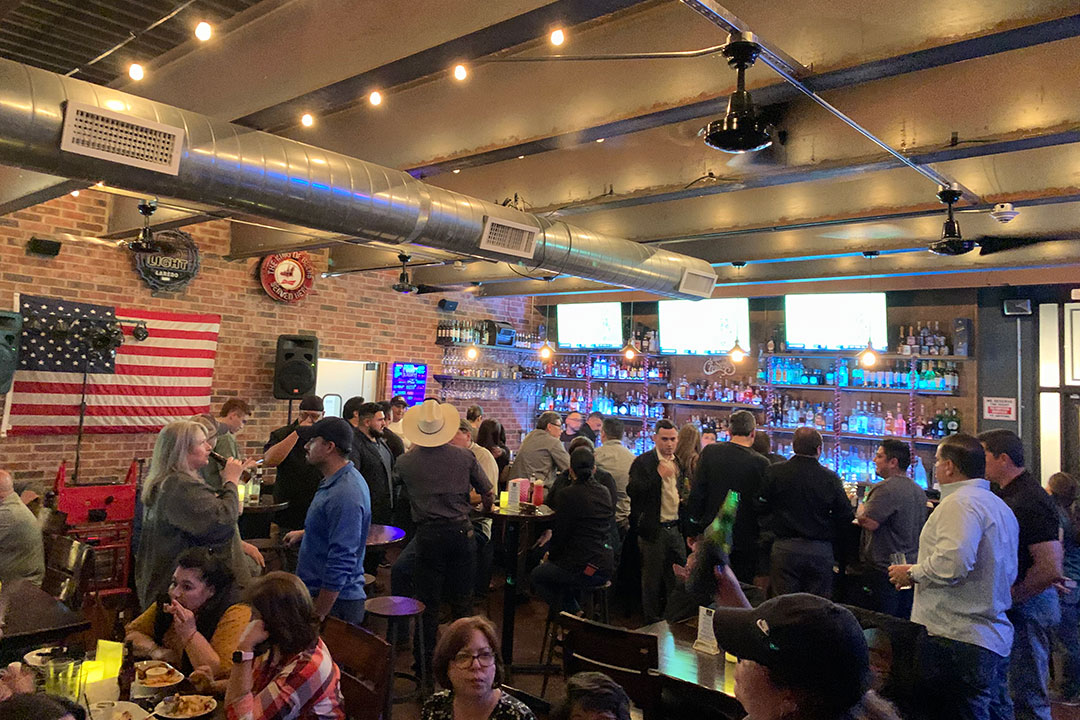 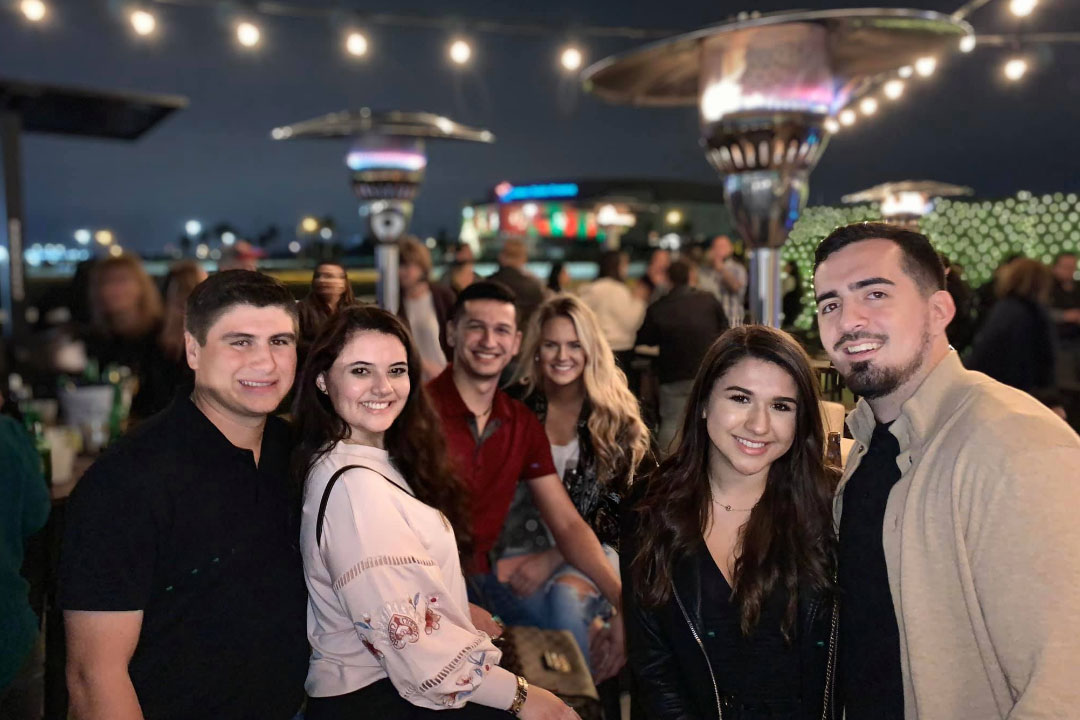 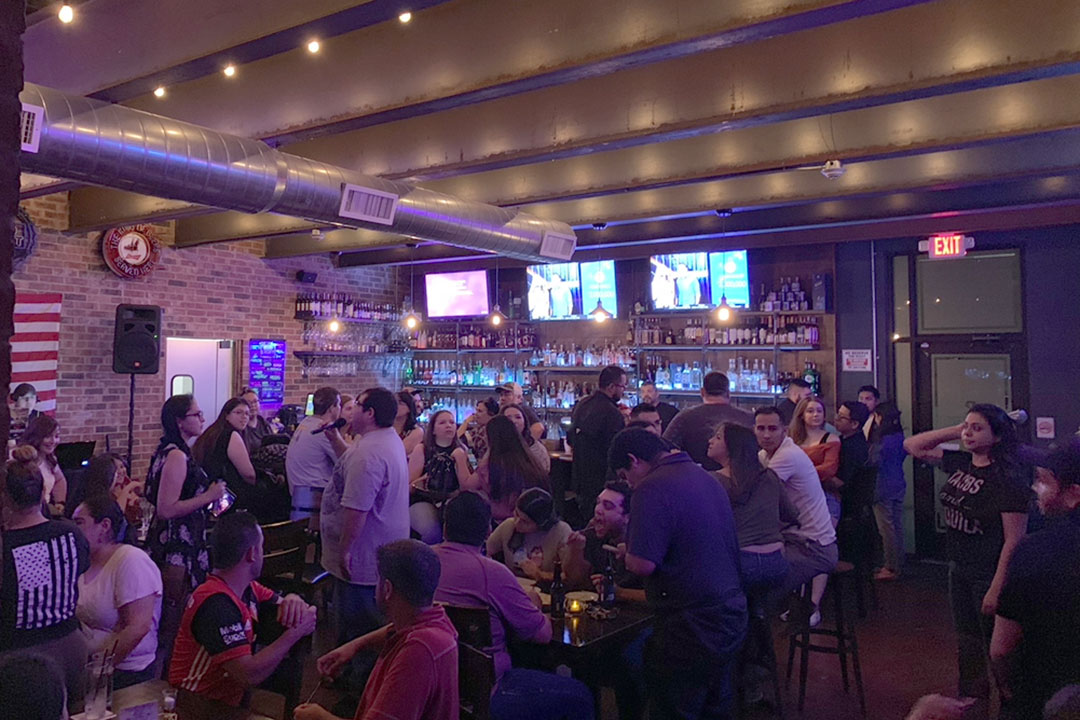 A SLICE OF LIFE

It all started in a small kitchen nook – a small pizzeria with a few tables in a restaurant to eat at. Gino Beniamino Benicrudo – a young chef with a dream, made pizzas for the local Sicilian pizza lovers on a day to day basis. Little did Gino know, his pizzeria would grow into something life-changing.

As one may know, It’s not easy to make a special pizza, and it’s even harder to perfect a pizza – Gino was an artist, a man with a vision for the best pizza anyone had to offer. Now, you might be asking, what is the catch to all of this? How did Gino’s pizza end up in south Texas, and why did it fall in the hands of Mr. K? Well, when Gino was getting older, he figured he’d move to Mexico to retire and possibly open up a small kitchen in Tulum where he could serve pizza to the locals and tourists. Mr. K, a man of great taste, got to know Gino while he was vacationing in Tulum and happened to be eating at The Gino Speciale – Gino’s pizza kitchen in Mexico. While getting to know each other, Gino took a great liking to Mr. K and even invited him over to his homestead. As time went on, Gino and Mr. K became more connected, and Gino took Mr. K under his wing – Mr. K was going to open up his pizzeria!
Mr. K ended up working odd jobs and got so busy raising a family; he let the pizzeria dream slip away.

Fast forward 30 years. Gino had no kids, his wife left him for a hippy surfer, he was old, his sight was failing him, his ability to make his beautiful pizzas was gone. Depression set in, and he took his own life with a 38 snubby.

He did leave a short suicide note for whoever would find it. It was a short six words …
“TELL MR. K TO MAKE THE PIZZAS!” 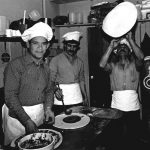 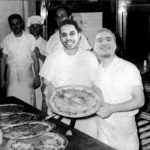 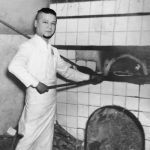 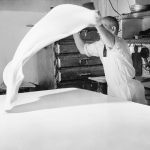 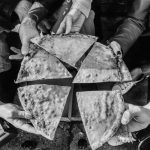 It’s going to be a Beautiful night for live musi

Come join us tonight for another Networking Laredo

This Rooftop bar menu keeps getting better🤩 We

Keep yourself warm in the inside pub while DJ char

This Rooftop bar menu keeps getting better.🤩 We

Friday night should be a great time with DJ charli

This Rooftop bar menu keeps getting better.🤩 We

Chef Raul has brought in some amazing wing sauces,

Join us at the bar tonight while Manny and Brandon

Keep yourself warm in the inside pub and side pati